The Homestead Museum is currently closed for in-person visitation. Join us for a virtual program and stay tuned for more information. 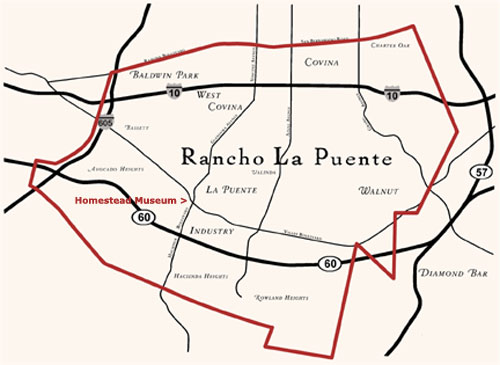 The Rancho La Puente was once one of the largest Mexican land grants in California. Its name comes from the bridge (puente) built over the San Jose Creek by Gaspar de Portolá's expedition during their trek from San Diego to Monterey in 1769. With the founding of the Mission San Gabriel two years later on the banks of the Rio Hondo (it moved to its present location in San Gabriel after a devastating flood), the rancho became part of the Mission's extensive land holdings. In 1842, it was granted to John Rowland by Governor Juan Alvarado as a 17,740-acre rancho for $1,000. The rancho was enlarged to 48,790 acres in 1845 when Governor Pío Pico named both John Rowland and William Workman as co-owners. With the annexation of California by the United States in 1848, the validity of the grant was reviewed by the U. S. Land Commission and it was not until 1867 that title was confirmed by President Andrew Johnson.