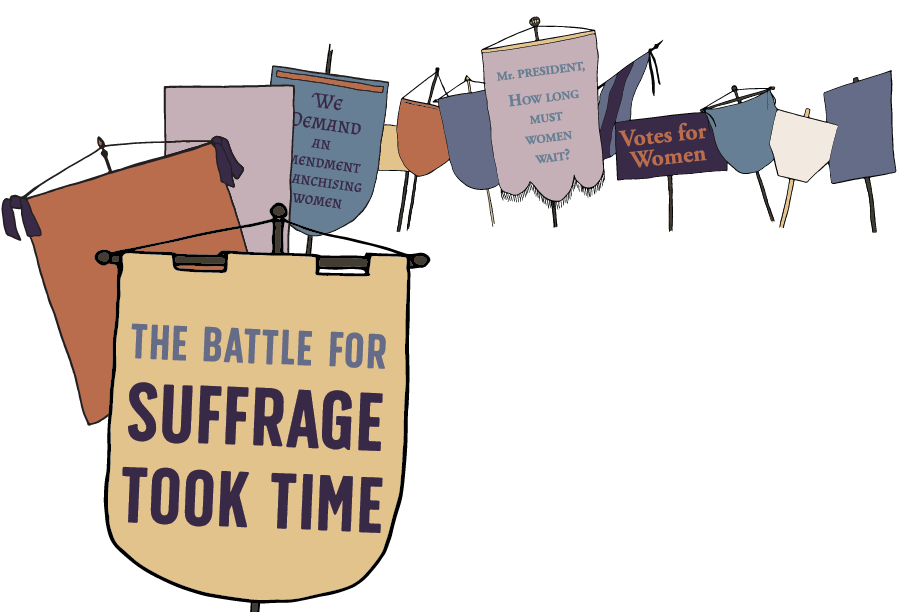 The passage of the 19th Amendment was not easy. It took decades of effort and persistence. Look though the timeline to discover how women finally secured their voting rights and learn about the many obstacles that stood in their path.

The Constitutional Convention decides that states will determine their own voting qualifications. Most states, in turn, give the right only to white, property-owning men.

New Jersey provides the vote to "all free inhabitants;" this is interpreted at the time to include women.

The first National Woman's Rights Convention is held in Worcester, Massachusetts. Over 1,000 women and men attend.

At a women's rights convention in Akron, Ohio, former slave Sojourner Truth delivers her speech, "Ain't I a Woman?" as an appeal to include African American women in the fight for voting rights. 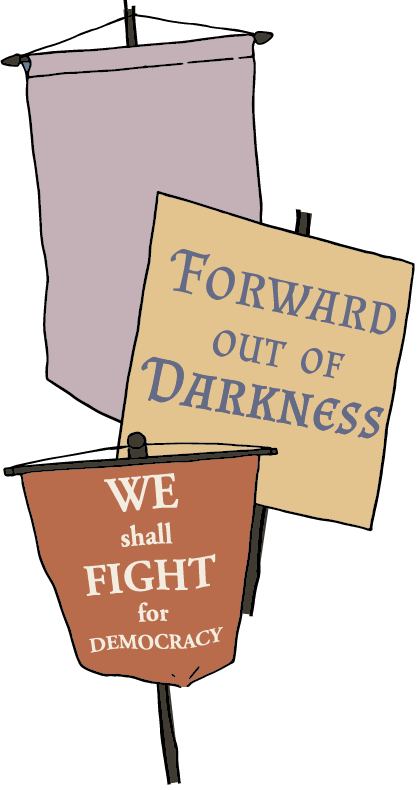 During the Civil War, activity is greatly lessened as the majority of activists are involved in the war effort.

The American Equal Rights Association (AERA) is formed by Susan B. Anthony and Elizabeth Cady Stanton. Its goal is to “secure Equal Rights to all American citizens, especially the right of suffrage (voting), irrespective of race, color, or sex.”

May- Caroline Severance establishes the New England Woman’s Club. This club serves as a model for an eventual movement that grows in popularity through the rest of the century. Women’s clubs began as social gatherings and transformed into reform-focused organizations that sought to tackle a variety of social issues such as child labor, legal justice, and women’s suffrage.

July-The 14th Amendment to the Constitution is ratified. This amendment defines "citizens" and "voters" exclusively as male.

December- The first federal women's suffrage amendment is introduced in Congress by Senator S.C. Pomeroy of Kansas. It is rejected.

May- The AERA splinters due to disagreements among members over support of the 15th Amendment, because it solely enfranchised African American males. Anthony and Stanton establish the National Woman Suffrage Association (NWSA) that seeks to achieve voting rights through a constitutional amendment.

December- Wyoming Territory is organized and is the first to grant unrestricted suffrage to women.

January- Suffrage leader Victoria Woodhull speaks to the Judiciary Committee of the House of Representatives to argue that women have the right to vote under the 14th Amendment. The committee does not agree.

Anthony and 15 other women attempt to vote in Rochester, New York, arguing that the 14th Amendment gives them the right. Anthony is arrested a few days later.

Woodhull is nominated for the presidency by the Equal Rights Party, which offers a platform supporting women's suffrage and equal rights.

After being denied a trial by jury on a charge of voting illegally, Anthony is convicted, but never pays the $100 fine.

The Woman's Christian Temperance Union (WCTU) is founded by Annie Wittenmyer. The WCTU becomes a major supporter in the fight for women’s suffrage. As a result, the liquor lobby becomes vocal opponents of suffrage out of fear that women would use the vote to prohibit the sale of alcohol.

In the case of Minor v. Happersett, the Supreme Court rules that the 14th Amendment does not grant women the right to vote. The Court determines that citizenship does not guarantee women’s voting rights and that their political rights are under individual states’ jurisdictions.

Senator Aaron Sargent of California introduces the Women’s Suffrage Amendment to Congress. The vote is delayed until 1887. 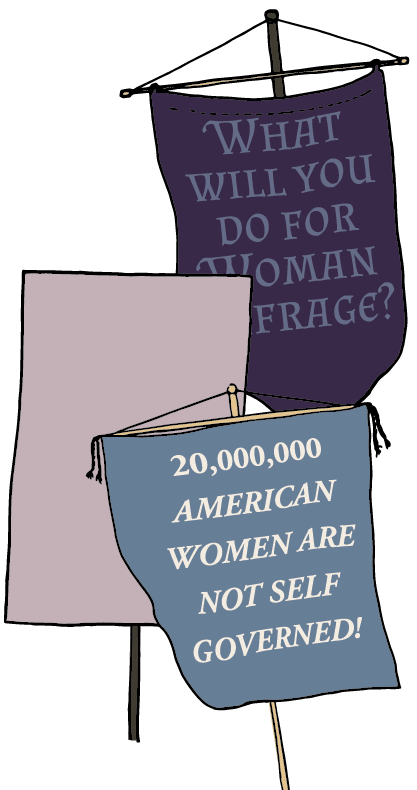 The House and Senate appoint committees on women's suffrage, which report favorably on the subject.

Women in the Washington Territory are granted full voting rights.

The Edmunds-Tucker Act takes the vote away from women in the Utah Territory in order to limit the Mormon vote.

The Supreme Court strikes down the law that enfranchised women in the Washington Territory.

The first vote on the Woman’s Suffrage Amendment is finally taken in the Senate. It is defeated 34 to 16, with 25 members absent.

Wyoming, having granted women’s suffrage as a territory, insists that they maintain suffrage if Wyoming becomes a state.

The NWSA and the AWSA merge to form the National American Woman Suffrage Association (NAWSA). The focus turns to working for women’s voting rights at the state level.

Wyoming becomes the first state to allow women to vote in all elections.

The American Federation of Labor declares support for a suffrage amendment.

April- In Los Angeles, Severance establishes the Friday Morning Club, which is devoted to cultural and social betterment, civic reform, and, eventually, suffrage.

Women's suffrage returns to Utah after it achieves statehood.

The NAWSA selects suffrage leader Ida Husted Harper to create a suffrage campaign in California, but the initiative ultimately fails.

Mary Church Terrell, Ida B. Wells-Barnett, and Frances E.W. Harper, among others, found the National Association of Colored Women’s Clubs with the goal to achieve equality for African American women.

The first suffrage march in the nation is held in Oakland. Organized by the California Equal Suffrage Association, 300 women march to the site of the State Republican Convention to demand women’s suffrage be added to the platform. The party chooses not add to suffrage until the following year.

Maud Younger begins the Wage Earner’s Equal Suffrage League in California. She plays a key role in attracting lower-income women to the movement. 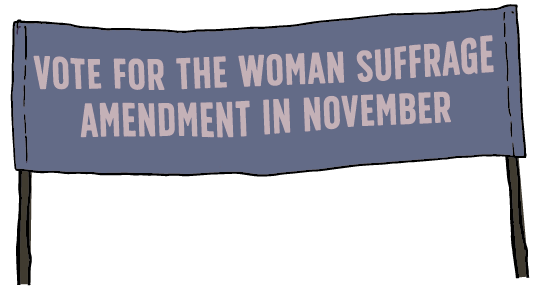 The State of Washington grants women the right to vote.

January- State Senator Charles Bell of Pasadena sponsors Senate Constitutional Amendment No. 8 (Proposition 4), which would grant women the right to vote. The proposition is placed on the October ballot.

September- The Committee of Fifty is organized in Los Angeles. This influential all-male group dedicates themselves to opposing women's suffrage in the state.

October- The proposition passes in California by a mere 3,587 votes.

The National Association Opposed to Woman Suffrage (NAOWS) is established by Josephine Dodge.

Alice Paul becomes the leader of the Congressional Union (CU), a militant branch of the NAWSA.

Paul organizes the Woman's Suffrage Procession, a parade in Washington, D.C., on the eve of Woodrow Wilson's inauguration. The parade is attacked by a mob and hundreds of women are injured. No arrests are made.

The National Federation of Women’s Clubs, which had over two million women members formally endorses the suffrage campaign.

A transcontinental tour by suffragists gathers over a half-million signatures for petitions to Congress.

Paul and others deemed too militant are ousted from the NAWSA and form the National Woman's Party (NWP). 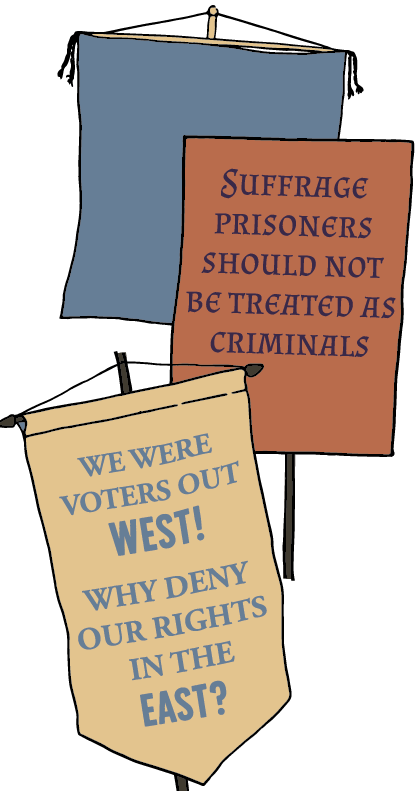 January- The NWP posts women known as the Sentinels of Liberty, or the Silent Sentinels, to protest outside the White House.

November- The "Night of Terror" occurs at the Occoquan Workhouse in Virginia. NWP prisoners are beaten and abused. In response to public outcry over their treatment, the government releases the women two weeks later.

Representative Jeannette Rankin opens debate on the 19th Amendment, which eventually grants women’s suffrage, in the House. It passes with exactly a two-thirds majority as required, but loses by two votes in the Senate. President Wilson addresses the Senate in support of the amendment.

January- the National Women's Party lights and guards a "Watchfire for Freedom" in which they burn the words of every speech President Wilson gave about democracy. It is maintained until the 19th Amendment passes Congress.

May- Congress votes again on the 19th Amendment. The House of Representatives passes it, 304 to 89. Opponents block action in the Senate for another two weeks.

June- The Senate passes the amendment with just two votes to spare, 56 to 25. Drafted by Anthony and first introduced in 1878 with the same wording, it is sent to the states for ratification, with a two-thirds majority required.

August- Tennessee becomes the 36th state to ratify the 19th amendment, bringing it into law.

- 19th Amendment to the Constitution