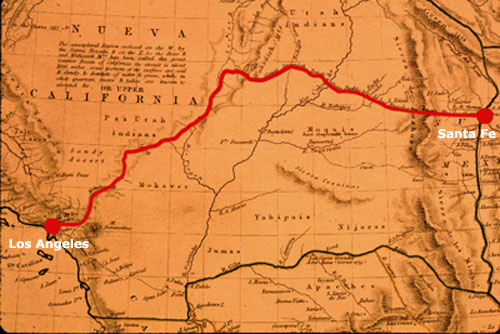 Detail from Central America, a map published by the Society for the Diffusion of Useful Knowledge, 1846.

"The longest, crookedest, most arduous pack mule route in America." So described by LeRoy and Ann Hafen, the Old Spanish Trail is the red line running through the center of this image. The trail has a fascinating history as a route used for commerce, slave-transportation, and emigration. Some sections were used in the eighteenth century by Spanish expeditions for trade and the movement of Native American Indian slaves. The full trail as a regularly used commercial route from Santa Fe, New Mexico to Los Angeles, California, however, was created about 1830. From its origins in the Spanish colonial era through its Mexican-era uses for commerce and emigration, the Old Spanish Trail is significant in the history of today's American Southwest.

In late 1841, the Rowland-Workman expedition was the first group consisting largely of emigrants to enter California from an eastern-based land route by traveling on the Old Spanish Trail. While its co-leaders John Rowland and William Workman settled on the La Puente rancho and became well-known Southern California residents, there were others in the group who also became prominent, including Lorenzo Trujillo, founder of the Agua Mansa settlement near present Riverside; Benjamin D. Wilson, politician, rancher and agriculturist in the western San Gabriel Valley; William Knight, whose Knight's Ferry and Knight's Landing are place names in the gold country of the Sierras; and Manuel Vaca, for whom Vacaville, near San Francisco, is named. The Old Spanish Trail Association, based in Colorado, is leading efforts to have the National Park Service recognize the trail as a National Historic Trail.