During the 1920s and '30s, Spanish Colonial Revival was one of the most popular architectural styles in the Southwest. Colorful ceramic tile as well as clay tile roofs, roughly plastered walls, arched doorways, and wrought iron window grilles create some of the key elements of this style. Inspired by the Panama California Exposition of 1915 as well as travels in Spain and Mexico, many architects found southern California the ideal setting for this type of architecture. The similarity to Spain's climate and landscape was the primary catalyst for using the Spanish Colonial Revival style to transform houses, stores, offices, and even cities throughout California, Arizona, New Mexico, and Texas. 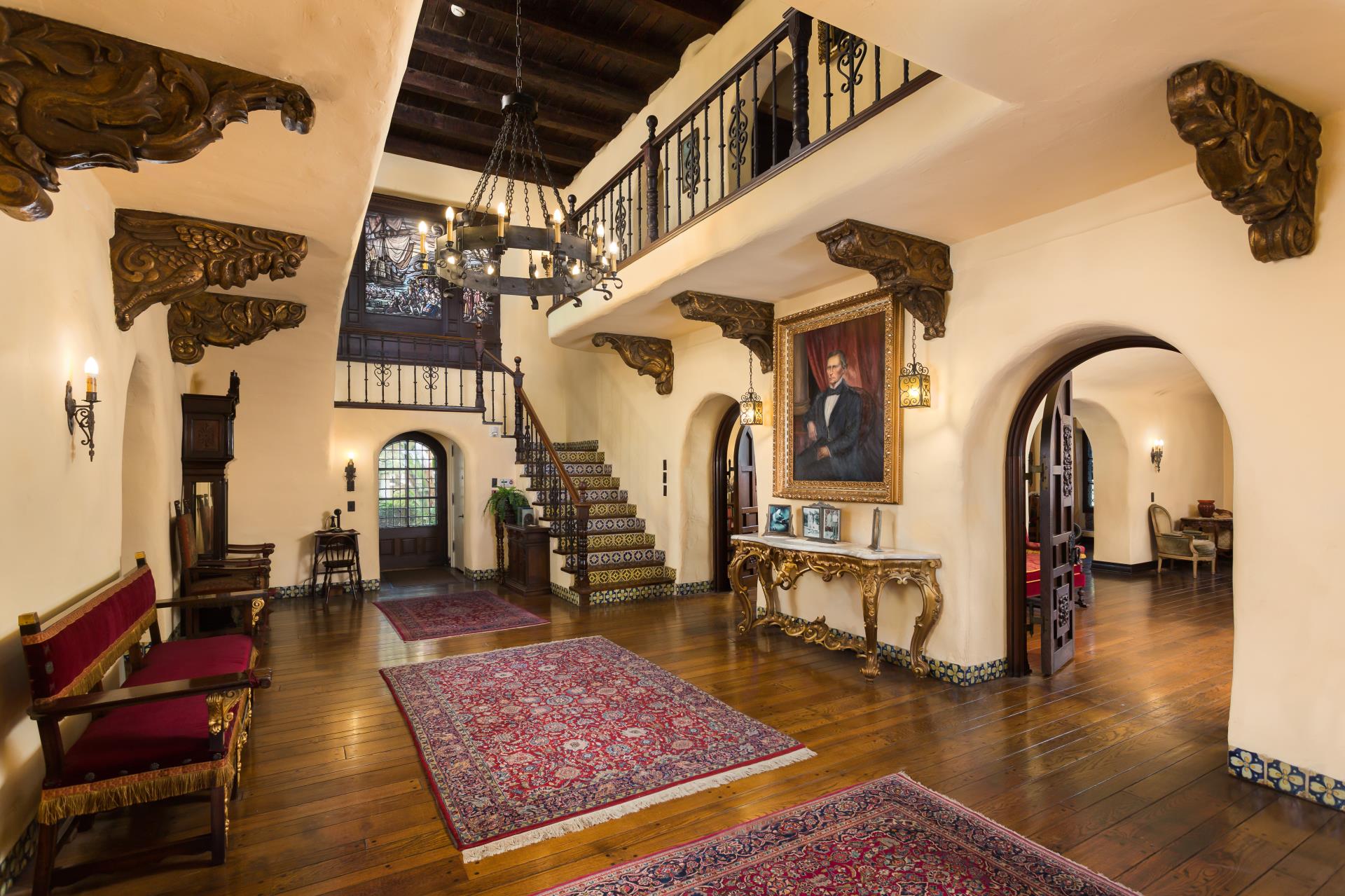 One of the most outstanding examples of Spanish Colonial Revival architecture in California is the Homestead Museum's La Casa Nueva (right). Initial designs for this house were developed by the Walter P. Temple family and the architectural firm of Walker and Eisen. Its final appearance, however, was largely the work of Roy Seldon Price, an architect new to Los Angeles. Price was originally from St. Louis where he was a draftsman with the firm of Mauran, Russell and Crowell. In the early 1920s he moved to Los Angeles and specialized in residential architecture. When he began work on La Casa Nueva in 1924, he had just completed a Spanish Colonial Revival style home in Beverly Hills for movie producer Thomas Ince. For La Casa Nueva, Price redesigned much of the interior and exterior by relocating staircases, altering doorways, and specifying trim and decoration, including tile. 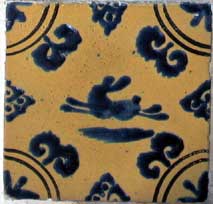 Visitors to La Casa Nueva are often impressed by the hundreds of colorful tiles, as well as the other architectural crafts, that fill this Spanish Colonial Revival style mansion. Tile is found in nearly every room of the house, either as baseboards, stair risers, fireplace surrounds, wall niches, or window seats. The largest and most public spaces of La Casa Nueva—the Main Hall, Living Room, Dining Room, and Library—exclusively use Mexican tile. These tiles range in size from 2" to 3" to 5" and feature the characteristic convex face covered with thick, bumpy glaze. Over two dozen different tile patterns are used throughout the house, including flowers, birds, and rabbits (left) covered in blue, yellow, green, white, and red. This tile was purchased from B. A. Whalen, a Los Angeles dealer in "Spanish, Italian and Mexican furniture, wrought iron, tile and pottery" and was most likely imported from Puebla, Mexico. 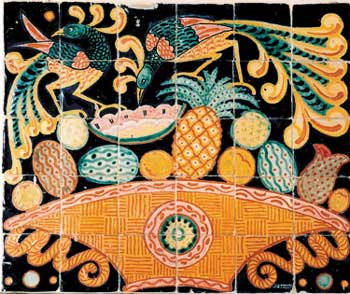 Most impressive are three tile panels signed by Pedro Sanchez (left). Sanchez was an artist working for Martinez and Co., a tilemaking firm in Puebla. In the Dining Room, a 36" by 24" panel features a potted plant with stylized flowers. Lining the back of a built-in cupboard in the Breakfast Room is a 24" by 29" panel showing two peacocks eating a basket of fruit. In the bedroom of Thomas Temple, a niche contains a 32" by 27" panel of a Madonna and Child guarded by two angels. These three panels cost $50 each, a considerable amount at a time when most Americans earned about $20 a week.

Also impressive are the American tiles used in the bathrooms and Kitchen of La Casa Nueva. Each bathroom uses a different pattern in brilliant colors, such as blue sunflowers and pink roses. Some of the American tiles are similar to patterns produced by the Malibu Potteries, 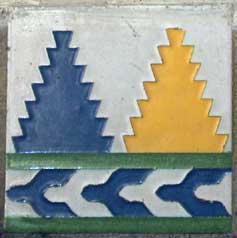 such as paired ziggurats (right), molded yellow squash blossoms, and interlaced geometric designs, their smooth surfaces interrupted only by the raised lines that separate the glazes. Although the source of these tiles is not certain, it is likely that they were made by the American Encaustic Tiling Company of Zanesville, Ohio, which had several manufacturing plants in the Los Angeles area at that time, one of which was producing tiles of this kind. 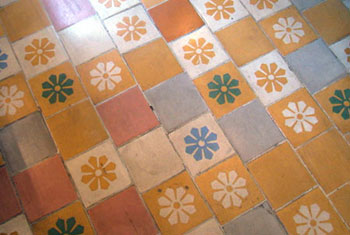 Cement tile or mosaico covers the floor of La Casa Nueva's Breakfast Room (left), Barber Shop, and balconies and serves as wall trim in the Tepee. Made in Mexico, mosaico is created by compressing cement, often colored with marble dust, into square forms. Its colors of mustard yellow, pale blue, and sage green arranged in bold flowered and geometric patterns seem to make the designs appear more modern than historic. 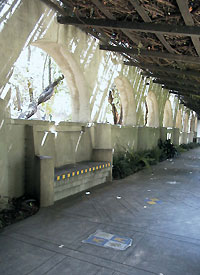 Surrounding La Casa Nueva is a grapevine-covered walkway with a concrete floor that features the incised names of all of the California missions as well as tile diamonds, six-pointed stars, and coats of arms (right). Two large tile panels, one a shield composed of various Workman and Temple family cattle brands and the other a stylized sunburst dedicated to pioneer William Workman, rest in the floor at the southeast gate.

The Temple family had few years to enjoy La Casa Nueva's tile and other architectural crafts, since they lost their house and land by the early 1930s. During the years that followed, the house was used as a boys' military school and a convalescent hospital. The City of Industry purchased the property by 1970 and began an extensive restoration process to return the site to its original appearance. Goez Art Studios, an East Los Angeles company recognized for its tile murals, so accurately reproduced the missing and broken tiles that it is difficult to distinguish the new ones from the originals.

We are fortunate that today we can still view the hundreds of colorful Mexican and American tiles from the 1920s. The beauty and history of tile and other architectural crafts in Southern California can be discovered through the Homestead Museum's free public tours and in our research library and collection. For more information, contact the Homestead Museum at (626) 968-8492 or info@homesteadmuseum.org.

Filled with tile from the 1920s Malibu Potteries, the Adamson House at the Malibu Lagoon Museum (a California State Park) can be visited at http://www.parks.ca.gov/?page_id=672

Miller Art Tile, who creates reproduction tile made on Catalina Island during the 1920s and '30s, http://www.spookshows.com/mat/index.htm