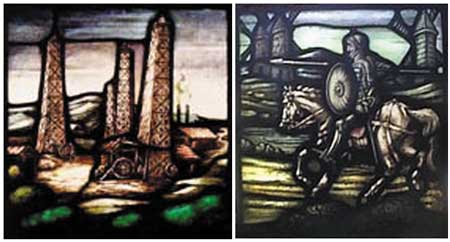 Among the most popular artworks in La Casa Nueva are the nearly fifty stained glass windows that are found throughout the house, from the impressive entry hall to the private bedrooms, where their jewel-like colors are lit by the sun. Representing a variety of scenes from Don Quixote (far right) to climbing roses to oil wells, La Casa Nueva's stained glass windows represent one of the largest public collections of its kind in California. Some, perhaps even all, of the windows were custom-made since many feature the history and portraits of the Temple family. Although we are not certain who created the windows, it is believed they came from Chicago, which was a major stained glass production center when La Casa Nueva was under construction in the mid-1920s. They closely resemble the style and type of windows produced by the Munich Studio, which was in operation from 1903 to 1932. 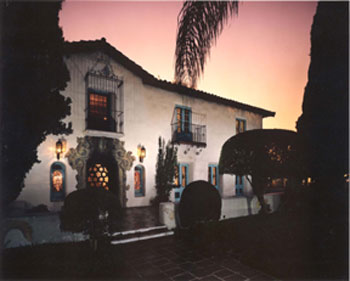 The term stained glass is a bit misleading because it actually refers to several different glass coloring techniques. Most often, the glass is colored throughout by various metallic oxides added during manufacturing (also called pot metal glass). The additives produce a wide range of colors; for example, blue is created by cobalt while red or ruby is produced by gold. In other instances, the glass is colored by enamels that are painted on the surface (also called painted glass) or by silver chloride to produce a yellow that penetrates the surface (also called silver stain).

To create a stained glass window, an artist first places his design on paper to determine colors and cutting, carefully avoiding shapes that would easily break or would be impossible to cut. From the paper pattern, the glass is cut into the required shapes. The individual glass pieces are then composed like a puzzle and held in place with lead strips or came. Once fitted, the lead joints are soldered together and mortared to create a secure and weather-tight window.

In the early nineteenth century, stained glass became popular in the United States with the introduction of the Gothic Revival style of architecture. Drawing on medieval churches for inspiration, the Gothic Revival influenced the design of churches, houses, and furniture, which began to feature trefoils, pointed arches, and crockets. Like their medieval counterparts, windows often used stained glass. Much of this glass was imported from England or Germany, but beginning in the 1840s, skilled craftsmen quickly became adept at producing stained glass windows in the United States.

By the late nineteenth century, stained glass windows could be found in doors, entry halls, stairways, and transoms of churches, homes, offices, and stores. The revival of historic architectural styles in the 1920s, such as English Tudor or Spanish Colonial, prompted a return to medieval designs to appear more historically accurate.

This historicism can be seen in the deliberate aging of the windows to make them look centuries old. In La Casa Nueva, the leaded windows seem haphazardly repaired over time; however, all the glass is from the 1920s. The artist carefully selected two pieces of glass for a single pane to make it appear as if it had been broken and repaired. Often one of the pieces is of a different "inferior" glass that is either bubbled or colored. The lead cames that join the glass panes were then carved and shaped by hand to appear as if worn and weathered over the years. 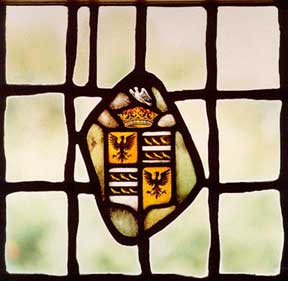 Some windows have small scenes of stained glass, such as a coat of arms (left), set into a larger leaded window of clear glass. Often the stained glass scene was designed to look like a historic fragment rescued from an ancient building. Although the windows in La Casa Nueva are all new, they mimic the patchwork installation of historic European stained glass fragments in other houses. The use of fragments, whether old or new, not only decorated houses in a picturesque manner but provided the owners with a visible link to the past.

Although artists tried to mimic medieval windows, they used techniques that were not introduced until the fifteenth century. For example, craftsmen used colored enamels, such as blues, reds, and greens, to render clothing and landscapes. In the Middle Ages, paint was limited to colorless enamels (i.e., brown or black pigments). 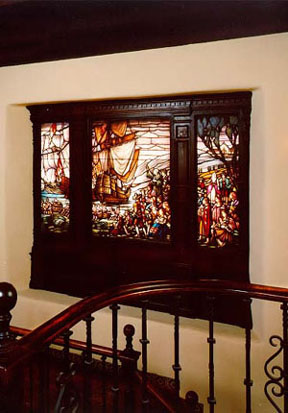 The stained glass windows found throughout La Casa Nueva demonstrate the variety of techniques popular in the early twentieth century. Visitors see the largest example upon entering the house—a triptych window above the entry hall staircase (right). Measuring five feet high by nine feet long, it depicts a romantic scene of the California coast with dozens of settlers, missionaries, and servants eagerly awaiting the arrival of several Spanish galleons.

In other parts of the house, the skilled technique of painting is more easily seen. Roses, irises, morning glories, and wisteria bloom all year long in the windows of the Breakfast Room, Music Practice Room, and Agnes's Bedroom, where they have been painted on clear glass. 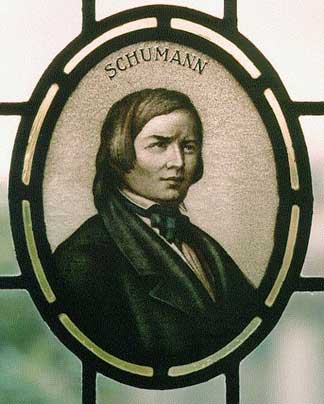 Famous authors and composers greet you in the Music Room and Library windows, where their portraits are carefully drawn and stippled in dark brown enamels to resemble printed engravings (left).

The beauty and history of stained glass and other architectural crafts in southern California can be discovered through the Homestead Museum's free public tours and in our growing research library.

Founded in 1921, the British Society of Master Glass Painters is Britain's only organization devoted exclusively to the art and craft of stained glass.

The medieval stained glass windows from Esslingen am Neckar (Germany) are exhibited at http://www.bawue.de/~wmwerner/essling/english/glas01.html by the Evangelical Gesamtkirchengemeinde Esslingen, the Landesdenkmalamt Baden-Württemberg, and the City of Esslingen.